While researching for another Italian migrant, we bounced into this one married the same day as his compatriot we were working on.

Cristino Stefani was born and baptized on June 26, 1832 in the parish of Santa Maria of Loppia in Tuscany. Like many boys of this part of the country, he learned how to make plaster figurines, "figure" in Italian, and would go peddling to sell them. So we were not surprised to read on the 1854 Loppia census that he was gone "alle figure". The census didn't say anything about his destination.

Excerpt of the 1854 Loppia census.


We had found one Cristino Stefani in Manchester, Vermont on the 1860 Federal census who was figurine manufacturer. He was enumerated with Michele Rigali, who we knew was born in Loppia and who became a well-known statue maker of Quebec city several years later. But on Stefani, at this point, we had no information other than his age, which is often wrong on censuses, and nationality. So the marriage found in Saint-Jean-sur-Richelieu, in the province of Quebec, was really a surprise to us. A good one though.

Stefani arrived in Saint-Jean-d'Iberville, Canada during the course of the year 1861 most probably to work on the church extension project that started that same year.

About a year later, on June 18, 1862, Cristino Stefani, son of Domenico Stefani and Anna Michelini married Helen Landry, dauther of the late René Landry and Celeste Tremblay, in Saint-Jean-l'Evangeliste, the catholic church of Saint-Jean-d'Iberville. 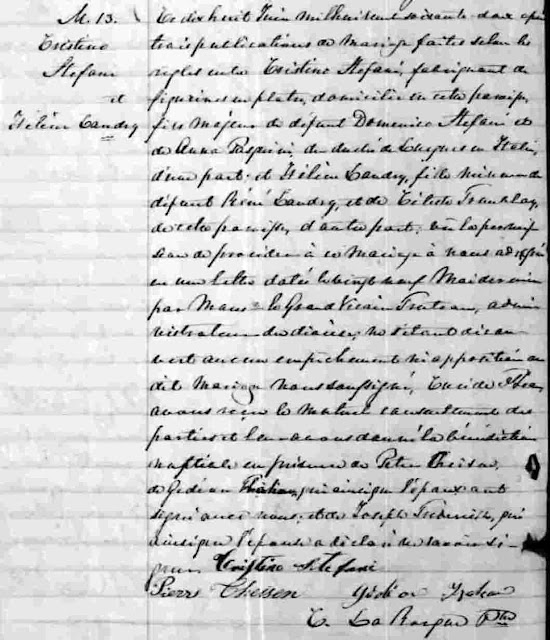 Helen Landry died on August 21, 1868 at the age of 23. She was buried two days later in the local cemetery.

Cristino's second marriage, then a merchant of St-Jean, was to Josephine Lebeau, daughter of Joseph Lebeau and Seraphine Collet, on February 8, 1869. The couple had three daughters born in St-Jean: Marie Josephine, born on December 28, 1869; Clarinte "Corinne", born on August 1st, 1872; and Albertine, born on October 26, 1874.

According to the 1911 Canadian census, he was still a merchant of St-Jean. We found him in the Lovell business directory of the province of Quebec as a grocer in 1906-1907. 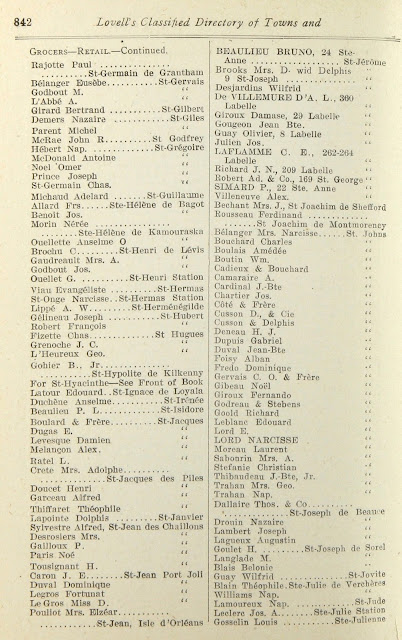 Page from the Lovell buisiness directory of the province of Quebec 1906-1907.

The name Stefani became extinct since his son Florida had two daughters from his marriage with Marie Louise Dupuis in 1895. Marie married David Moore in 1887, Corinne, Joseph Emile Normandin in 1895 and Albertine, Louis Rémi Marien in 1899.

What kind of documents we can use to research our italian ancestors?

Donato Di MAULO et Maria Giuseppa TODARO were married in 1926 in Montreal. Both are Italians, except that the bride was born in Montreal. The first document I want to find is the marriage bulletin from the collection «Les mariages du Québec de 1926 à 1997». From that document, we will learn the date and the name of the church where they were married. We found the document. The information shows on line 23 and 24. 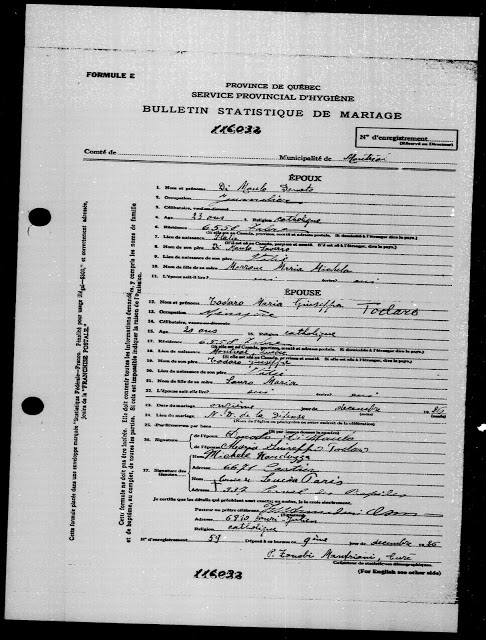 
We now can search for the marriage record in the Notre-Dame de la Défense of Montréal register to get more info. 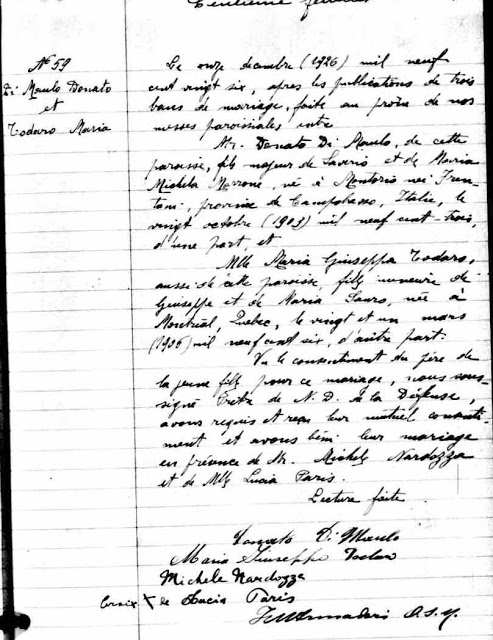 This record gives a lot of info. First, we learn that Donato Di MAULO is the son of Saverio Di MAULO and Maria Michela MARRONE, that he was born in Montorio nei Frentani, province of Campobasso on the 20th of October 1903. And that Maria Giuseppa TODARO is the daughter of Giuseppe TODARO and Maria SAURO, that she was born in Montreal on the 21st of March 1906.

To learn more about the family of the groom in Italy, we need to search the civil records of Montorio nei Frentani, province of Campobasso on Antenati web site. I use the marriage record index to find the marriage of Saverio Di MAULO and Maria Michela MARRONE. There it is : they were married in 1892, record number 18. 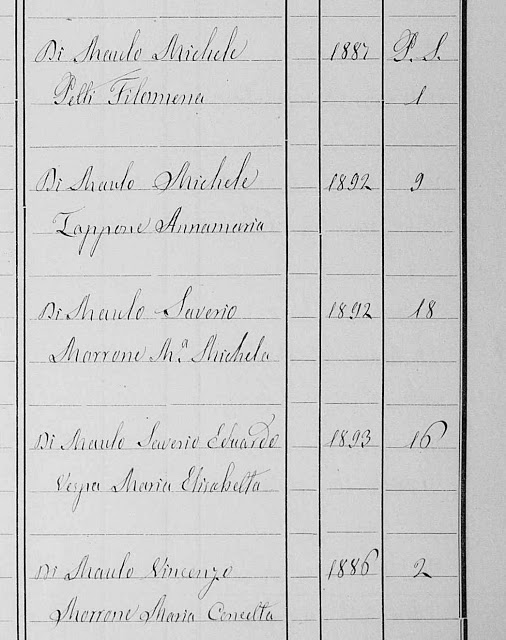 Excerpt of the marriage record index of Montorio nei Frentani.

Then, it was easy finding the record. The marriage was registered on the 3rd of December 1892 in the civil records of Montorio nei Frentani. Saverio is the son of Antonio Di MAULO and Maria Caterina MONTANARO. 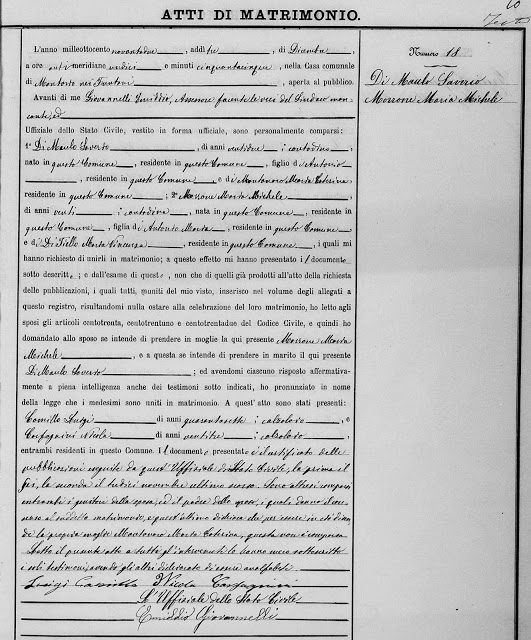 Marriage found in the civil records of Montorio nei Frentani.

All italian migrants didn't get to Canada at the same time. Even if we find several of them in Montreal at the end of the 18th century, the first wave really left Italy at the turn of the 20th century.

The italian civil records from the beginning of the 19th century until 1866 are kept at the state Archives (Archivio di Stato) of each province. After 1866, you'll find them at the "comune" the town your ancestor's from.

If you are lucky, you'll go back a good 4 or 5 generations in Italy thanks to the digitized civil archives available online. Others will have first to contact the comune to find their ancestors.

To go farther back in time, before 1800, you'll have to visit the church of the village your ancestor's from. Civil records did not exist prior to 1800. So you'll have to look for baptism, marriage or burial records. This is what I did for my family and I was able to bring my lineage back to 1602.

A seasoned genealogist can do this kind of research for you, and of course will charge for it. If you deal with a local genealogist, living in Italy, the fees will go up dramatically. On the other hand, if you are thinking of doing the reasearch yourself, be prepared : hollidays, the archives opening hours that differ from one place to another, the number of document your allowed to look at per day, the language, etc. If you need someone to do the research for you, some genealogists here in Canada can also do a great job.

It's up to you to decide whether you want to do it yourself of not!
Publié par Suzanne Galaise à 18 h 09 Aucun commentaire:

This series includes families civil registers (registri anagrafici). They could also be called Family files (fogli di famiglia). This census-like collection states, for all nuclear family members, their name, address, date and place of birth, as well as their relationship with the head of household. There is, however, a significant difference from a census: the Family file is updated over time as new events are occurring.

Do not rely on the file's year indicated on Antenati Website; rather consider it as the earliest date for this family. In the example provided below the year indicated is 1865; none of the family members were born at that date. 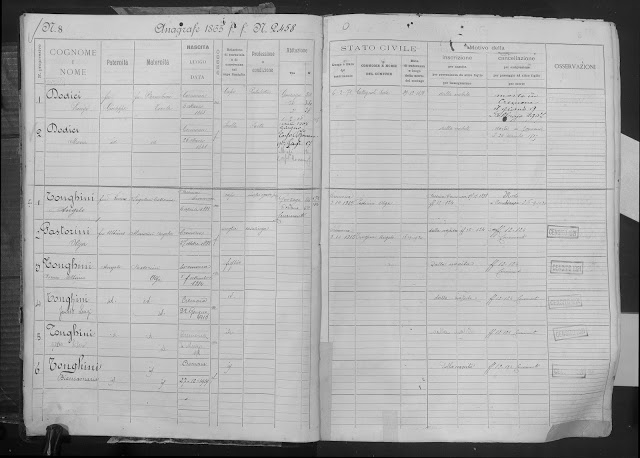 Here is the Tonghini family. The husband and wife were born during the 1880s, they were married in 1912 and their four children were all born by 1919. The parents' names of each individual are indicated—always a precious information for genealogists. The 1921 mention indicates that all individuals were enumerated for that census year.

Let's look at the head of household: Angelo Tonghini was the son of Romeo Tonghini and Caterina Segalini. He was born on April 6, 1881, in Pessina Cremonese, a town in the province of Cremona. Angelo married Olga Pastorini on October 3, 1912, in Cremona. He passed away on September 16, 1920, in Roccabianca (most likely in the province of Parme).

Angelo was survived by his widow and four young children.

These Family files may be consulted at the Anagrafe office in any Italian town. The search must be conducted on site. However, the provinces of Cremona and Potenza have made these files available through the Website of Antenati. Let's hope other provinces will follow their example!

Jean Baptiste Forte did not settle in New France. However he left a trace of his presence. Here's our partial transcription of this document (in French) : 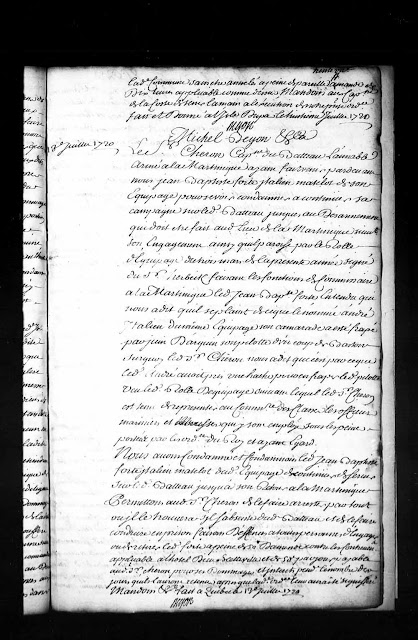 BAnQ Québec - Fonds des intendants - Ordonnances de l'intendant Bégon - Cote : E1,S1,P1204
How did these two Italians end up being hired in Martinique, and working with a French equipage in 1720? We can't answer this question now.

But this document is certainly one of the rare testimony of the presence of Italians in New France.
Publié par Suzanne Galaise à 13 h 51 Aucun commentaire:

Little Italy of Montreal or «Piccola Italia» - the very beginning

Italian families slowly left Downtown Montreal to settle North of Van Horne street and South of Jean-Talon. As we can see in the Montreal Lovell directory of 1911-1912, Clark street is one of those streets where we could find several italian families. 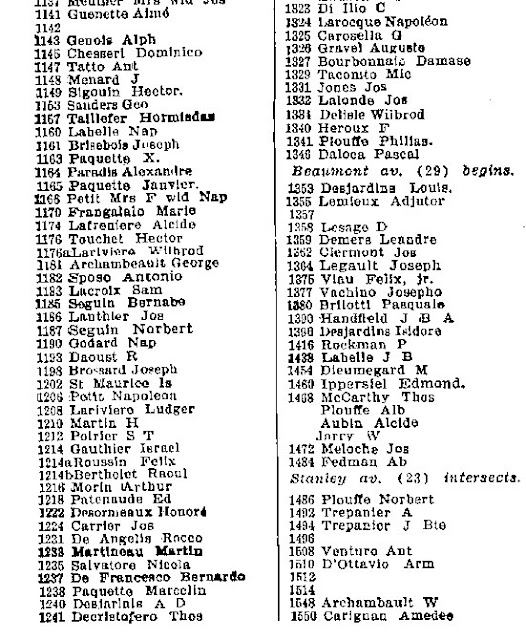 We noted the same on the 1911 Canada census for Clark street, from the bottom of page 1 continuing on page 2. 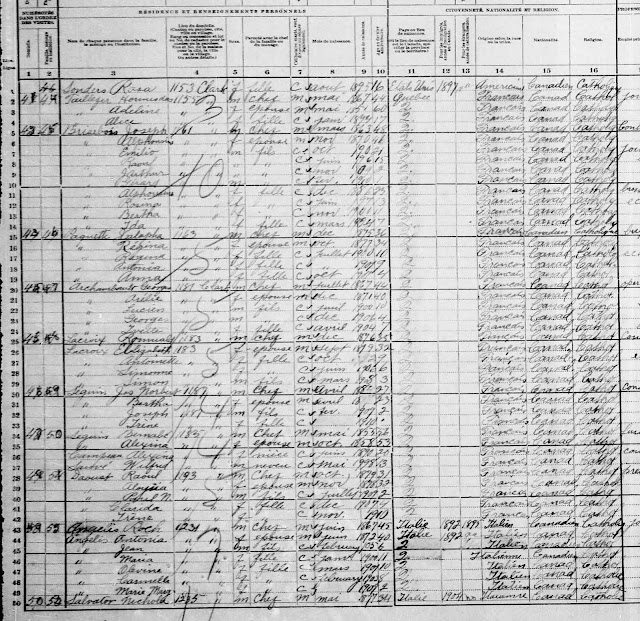 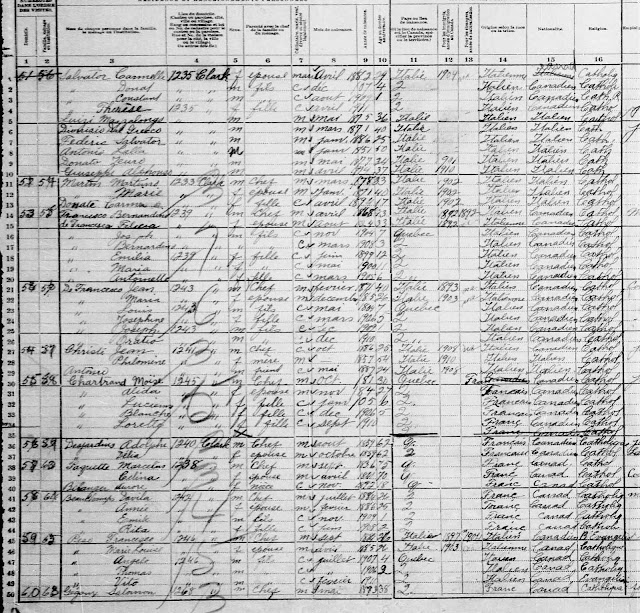 Excerpts from 1911 Canada of Canada, Clark street in Montréal.

On those pages of the 1911 census, we can find very interesting informations: the year of arrival of the migrant and in what year he was naturalized, if the case.

As part of Montréal's Nuit blanche, on Saturday, February 27, from 7 PM to midnight, the Société généalogique canadienne-française is hosting a Technonite genealogy event at Château Ramezay, in a room specially equipped for this purpose.

Genealogy has much evolved over the years. It is possible nowadays to climb our family tree in the blink of an eye and find out who our pioneer ancestor is. For neophytes attending this event, we will help them find their French Canadian family roots, break down their genealogy brick walls, solve their family secrets and answer all the questions they may have, all this in an unforgettable festive evening.